Welcome to Visit Alexandria’s Spring Social with a special pop-up art experience in their brand-new offices! Presented by Old Town’s Kyo Gallery located at the corner of King and Patrick, learn more about our amazing artists and art below.

Use coupon code: “VisitAlex” at checkout (no quotation marks) for an exclusive 20% discount on all of Kyo’s artworks!

Alonzo J. Davis’ career as an artist spans four decades.  A native of Tuskegee, Alabama, Davis moved with his family to Los Angeles in his early teens.  After acquiring an undergraduate degree at Pepperdine College he earned an MFA in Printmaking and Design at Otis Art Institute.  Influenced early on by the assemblages, Davis soon took wing and began to experiment with a variety of mediums, techniques and themes. At the suggestion of artist and former professor, Charles White, Davis began to produce prints and paintings in series. While he was inspired by travel to Africa, the Caribbean and American Southwest—the colors and patterns of the Pacific Rim cultures also seeped into Davis’ artwork.  During the ‘70’s and early ‘80’s, Davis’ involvement in the California mural movement culminated with the 1984 Olympic Murals project.  His Eye on ’84 is one of ten murals on the walls of the downtown Los Angeles Harbor Freeway.

“My art choices and world views have been inspired by travel. Through travel, I seek influences, cultural centers, energies, new terrain and the power of both the spoken and unspoken. The magic of the Southwest United States, Brazil, Haiti and West Africa has penetrated my work. Southern California, my home for thirty years, has also had an indelible impact and the colors and rhythms of the Pacific Rim continue to infiltrate. In recent years, I have been creating works about social justice issues and the worsening climate crisis.” 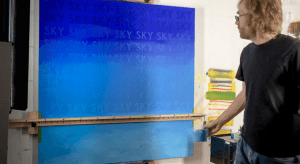 “I make paintings manipulating words. I compel shapes to emerge out of those words and letterforms, commingling them in abstractions evoking my everyday sensibility. I look to elicit a eureka moment from seeing the commonplace de novo. I engage with the enigmatic, what catches me off-guard, what makes me smile, and what I encounter serendipitously. I aspire to paint abstractions exploiting ugly words, change how they are perceived, appropriate their voice and suspend their toxicity, however briefly. I believe a word’s meaning can be just a starting point, a way into the work but never the last word.

When making a painting I follow a process, exerting what control I can although I welcome the accident. I begin a painting with specific words, there is often a grid that keeps an order to the work, I alter the paint to make it workable to my ends, and through ongoing experimentation with materials I have worked out methods that serve as a roadmap of sorts. When the elements are combining and intersecting an endless number of shapes and patterns emerge and the words fade. Different words give birth to different shapes. I find those shapes and nurture them in my paintings.”

“Exploring the qualities of form and material, my goal is to present a visual balance of elements.  Mirroring the rhythm that occurs so prevalently in natural systems of order, this balance has become ingrained in our subconscious and reflective of our identity.  Art and nature are processes that memorialize what we experience and who we are.   The art that I create, expresses visually what cannot be explicitly said.”


May Britton was born in Honolulu and raised in Arlington, Virginia. Before devoting all of her professional time to making and exhibiting artwork, she was a construction company marketing director. Since 2000, her figurative and abstract sculptures and site-specific installations have been exhibited and collected in public and private collections in the US and abroad. She taught university courses in sculpture and three-dimensional design, and art classes to pre and elementary school-aged children. 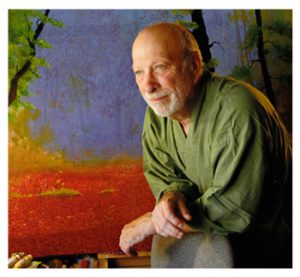 Born July 18, 1942 in Philadelphia, Pennsylvania, H.M. Saffer II launched his career by exhibiting his art at a public art show at the tender age of six.

Upon graduation from Temple University in 1965, he traveled to Paris, France to enroll in graduate economics courses. Concurrently, HM’s path took a different twist, as he soon leveraged his musical talent performing with notable French stars Hugues Aufray, Jacques Brel, Charles Aznavour, and many others. He was later hired by Barclay Records as a producer, and had several hit records in 1968 and 1969. During this period, he was also the chef / owner of two restaurants in Paris, and later a third located in Ibiza, Spain.

Remarkably, as engaged as he was, HM never stopped painting and exhibiting his works and has instructed at the Norman Rockwell Museum in Stockbridge, MA, Berkshire Community College, and Columbia-Greene Community College.

Yasmin’s artwork comes to her in reflecting on life experiences, fusing grandiose landscapes with spiritual reflections. Central Asia, the Middle East, Asia and Europe provide the source of her inspirations. Illuminations are omnipresent in her pieces as they express the essence of nature and the importance of precious metals. She works with different mediums, pressing hard down on the canvas, gouging out traces of personal journeys. Art for her is organic, transportive and she connects to places physically through materials.

She primarily works with metallic paints, pens, acrylics and oil pastels to fuse grandiose landscapes with spiritual reflections. Bussiere’s Torpedo Factory solo exhibit in 2021 celebrated the beauty of the Central Asian landscape and was inspired by her memories living and traveling across the continent.

Hee Sook Kim currently teaches as a Professor of Fine Arts at Haverford College, where she has taught since 2002. Kim earned her MFA and BFA in painting and printmaking at Seoul National University and an MA in printmaking at New York University.

“I’ve taken the subject, both in form and imagery, of Korean historical landscape painting, (specifically so-called Longevity Paintings or Sipjangsaeng-do in Korean), which were typically made only by men for the Korean upper class known as Yang Ban. Printing patterns (using Western oil colors) on top of the landscape traditionally used in Asian paintings (using water-based colors) transforms the masculine initial layer, now seen through a feminine veil. The painting’s surface, covered with glass bead work using shimmering rhinestones, speaks against the power of men in Korean cultural history and still prevalent in contemporary Korean society. The work is a construct/destruct/re-construct.”