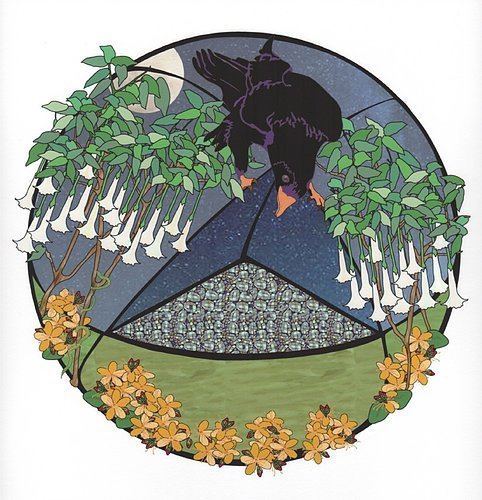 The Darkness of Depression

A mood disorder that affects the body, mind and ability to carry out normal everyday activities. It can be a feeling of aloneness, isolation, anger, and feeling trapped in one’s surroundings. Symptoms include trouble sleeping, apathy, difficulty concentrating, and lack of energy.

A little shrub with small yellow flowers with a bushy center stamens. It is an herbaceous perennial with a long history of herbal use. Clinical trials report modest improvement of depression and nervousness. It is a medicinal herb with antidepressant and anti-inflammatory properties. The name comes from its traditional flowering and harvesting on St. John’s day, the 24th of June. It is found in dry areas, fields, and pastures in sunny locations.

The full moon represents emotions and feelings. It is the eye of the night. Strength. Power.

Wanderer. Ravens have the ability to recognize old friends. A companion of the sun. It is thought that the raven is the only bird to understand the interpretations of signs and omens. The raven is a harbinger of change, and has hidden potential. A raven has acute discrimination and instinctiveness.

Earth healer. The serpent’s ability to shed skin makes it a symbol of transformation and self renewal.

A woody tree with pendulous flowers. All parts of the plant are potentially poisonous, with the seeds and leaves being especially toxic. Ingestion can cause paralysis, confusion, hallucinations, and death. It is a semi-woody shrub or small tree with many branches and a single trunk. It is very fragrant.

The name Datura is taken from the Hindu meaning, white thorn apple. Reports of severe mental anguish from ingesting this plant have been recorded.

A design made up of small pieces of colored glass or stone.

Divine guidance. The inability to achieve all your goals in one sweep, which means doing a lot of hard work to reach the next stage.