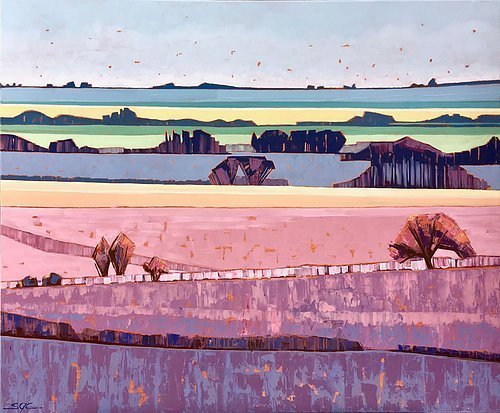 “I wanted to play with line, form and color, to feel paint move under my hand. I wanted to paint for the shear joy and simple, direct pleasure of it. After so many years of working in a medium that requires very controlled expression, I’m having a great time with the looseness and freedom of this most traditional of all art forms.”

“Coming from years spent as a designer, I respond to line, form, and color wherever I find them. I’m drawn to clean compositions, and tend to pare down my subject matter. I like to feel the texture of the paint and see the color hiding under the surface of forms. There’s something inherently sensuous about the very process of painting. Whether land, or sea, or skin, I can almost feel my brush stroking the subject’s surface as I work. Its magic.”

​I was born, raised, and spent most of my life in Richmond Virginia. In 2008, I moved lock stock and barrel (2 PODS actually ) to Damariscotta Maine. All because I fell in love with a man I met online - yes, it's true. In spite of a pair of failed marriages, I took a leap of faith. Faith in love, hope, romance. I jumped and haven't looked back. Meanwhile I paint. And cook. And hang out with this wonderful man it took me so long to find.