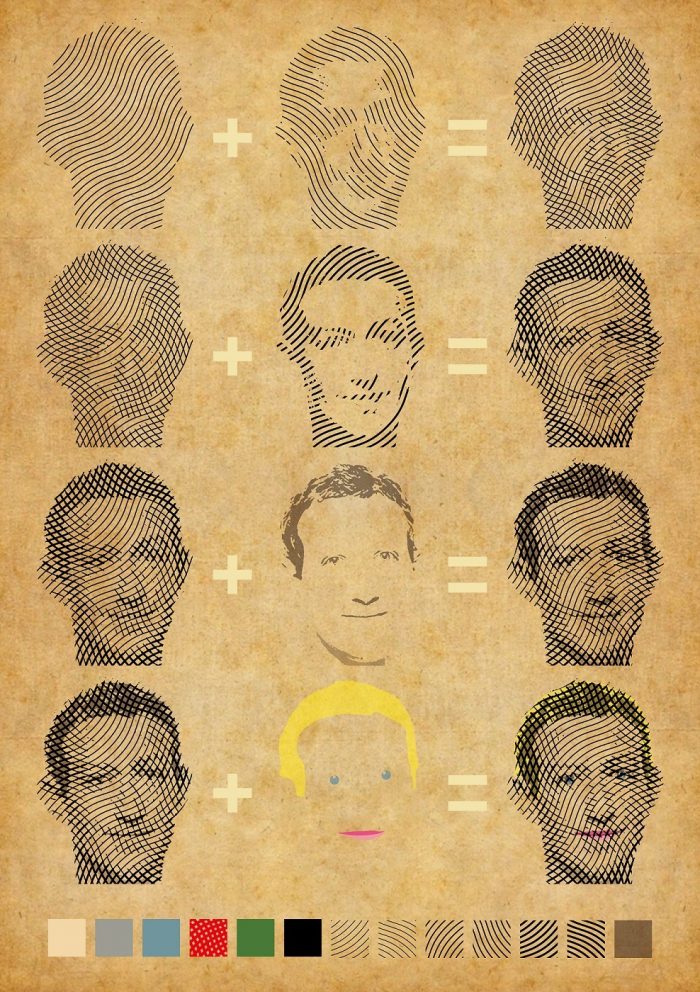 What does an artist portray? Well, something from his life. What surrounds him, what he is familiar with, what is important to him or what attracted him. He sublimates his personal life experience into certain graphic symbols. Each of them has its own palette. John Baldessari is recognizable by his method and techniques. Laurence Lowry used only five colors. Maybe, thus his arts are easy to fake? – I don’t know. Here is a part of my palette. I use the lines that I drew myself. Intersecting, these lines change the tonal saturation, construct a form. Sometimes I add a little color. Sometimes I don’t use hatching, I work with flat bright or muted colors. It happens I use modernist pointillism, it can be called peas. It is important for me that the picture contains a certain thought and, of course, humor. Sometimes I’m asked, how you did it? Okay, how does Warhol turn a photo into a silkscreen? I answer: with a help of great magic! But in my case I recommend:

– Fill each tone with its grid.

– If you can’t make it manually, do it in the computer.

Alexander was born in Siberia. Now he lives in Moscow. He likes to draw and he has been doing this for many years. This is not a job, this is a love. He is sure, the Russian art has a difficult but rich way. Alex hopes that his art inherits the best Russian traditions. His idols are Filonov, Chagall, Malevich, Kandinsky. The graphics should be comical, he is saying, light, absurd.Artist puts an important meaning in his images and forms. He sends a message. And he would like to be heard. Is not it? He often distorts the form. Distortion makes the form funny, free, familiar. He hopes that humor releases us from totalitarian captivity. He would like to be part of a free society. It's difficult. 100 years of totalitarian imprisonment make you really alone.On the 1993, Alex graduated from the university in Moscow. Being an engineer, he drafted bus stops and other needless objects for several years. In 2009 he graduated from the another institute and made the "Children draw a swastika" documentary which has an anti-Nazi orientation.Alexander has two sons, he loves them and would like to pass them this world, which is getting a little better.