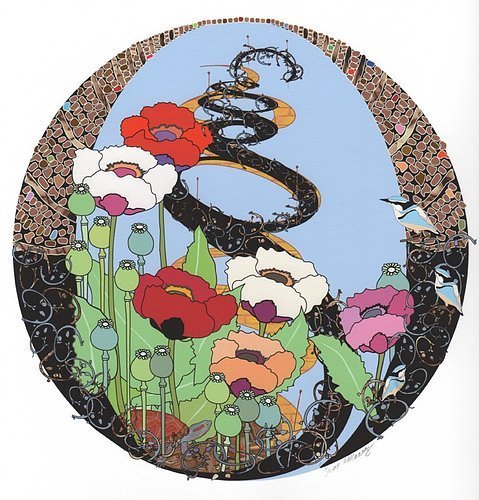 A passage from one state to another. To be reborn.

Functions as a guideline under the painful brambles. First appears in L. Frank Baum’s classic children’s book, The Wonderful Wizard of Oz (1900).

Magic shoes worn by Dorothy Gale in the 1939 film The Wizard of Oz (see yellow brick road). In the film, the slippers were a gift from the good witch Gilda and used to get Dorothy back home to Kansas.

Substance extracted from the bark is known for producing salicylic acid, the active ingredient in aspirin. The bark is used to provide pain relief for a variety of alignments and conditions. Helps to reduce fever.

Used in traditional Chinese and alternative medicine therapies, thin needles are inserted at specific points on the body for pain relief.

Is the Native American bird of medicine and healing. Shows courage, ingenuity, and resourcefulness. Has the ability to move in many directions.

The Chinese view the poppy as a sign of rest. Beauty.

Red: Passion. The sleep of death.