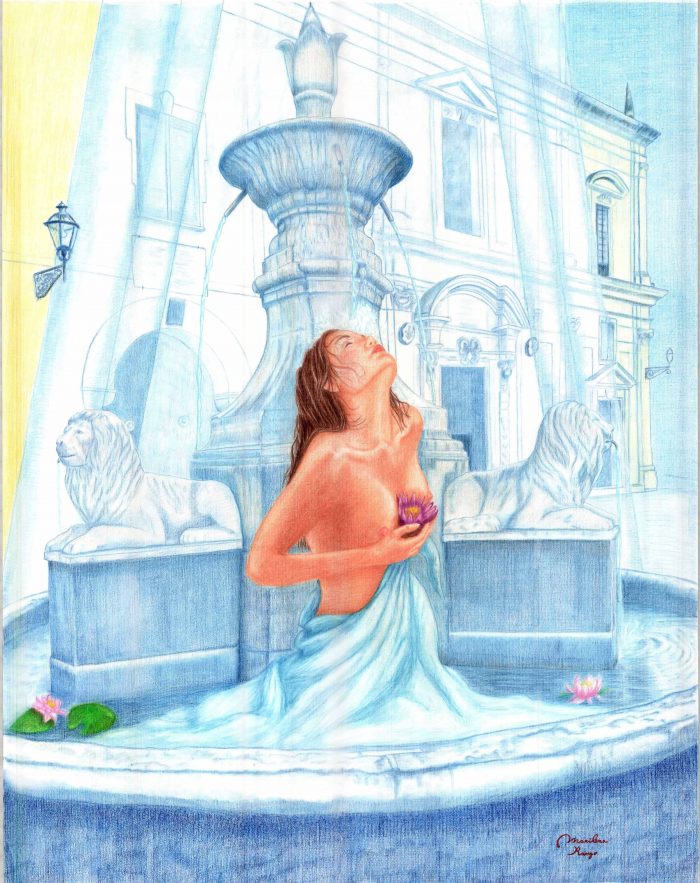 The work took part in the staff of 18 August 2012, at the “Le Bruscate Blu” beach resort of Sibari. It also participated in numerous collective exhibitions nationwide. Recently, it was exhibited at the Provincial Art Gallery of Salerno from October to November 2018, in the solo exhibition “Sulle Tracce dell’Anima”.

The picture was also included in the Mondadori volume on the 2014 Three-year Exhibition of Visual Arts in Rome and was also published in the Italian national magazine “Effetto Arte” of March-April 2013 and included in the yearbook of Contemporary Art.

Criticized by Daniele Radini Tedeschi: “Marilena Rango can be considered a polyhedric artist who, in addition to revolving around the female figure, presenting their sensual characteristics, deepens the issues related to human existence. In this work, the magic of nudity and its passion are very evident. The spell of the fountain is comparable to a Fellini scene, but linked to the homeland of our artist: Cassano allo Ionio (CS). The clear reference is Piazza Sant’Eusebio, in which there is an imposing travertine structure with a large drinking trough in which the figure is immersed in the foreground. In the background, through a veiled setting, you can see piazza Sant’Eusebio and the Cathedral, the Basilica of the Nativity of the Blessed Virgin Mary of Lauro.”