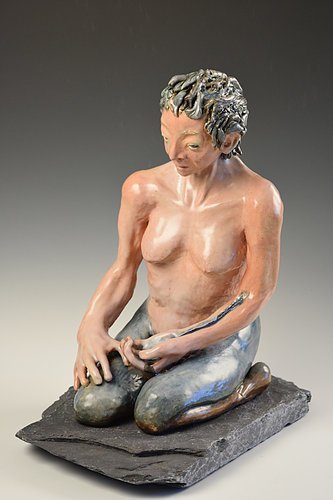 This piece is one of a series depicting Gaia, the persona of earth itself, in her many aspects. In it, I am interested in the idea that water is Gaia’s lifeblood and healing force. In this aspect, she is offering the water that flows from her vein, her arm is the channel, and the healing liquid falls from the pool of her hand. Her feet and legs are brown, green, and blue – signifying that she is of the earth. Her human form helps us to identify with her.

This piece was fired in reduction, causing the oxides and glaze pull oxygen from the clay body and the glaze chemicals, resulting in an almost magical transformation that is never completely predictable.