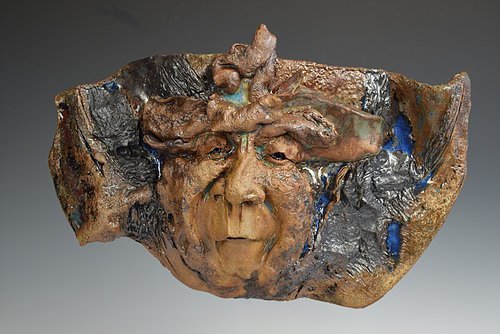 This piece is one of a series depicting elements of fire and earth.

In “Fracked” I was trying to convey the assault that fracking for gas inflicts against the earth. In this mask I see the jagged fissures induced by man-made earthquakes, the clean blue waters turning black with oil, and a suffering landscape. Sorry, but not all nature spirits are happy and beautiful in this day and age.

My masks are portraits of the various elemental life forces that populate nature, mythology, and folklore. This piece is a personification of a landscape suffering the damage that we so casually inflict.