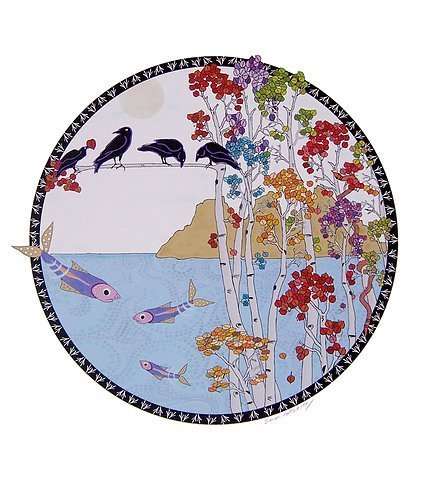 Often the first tree to reforest burned woodlands. Symbolism includes determination and overcoming fears and doubts. The tree is seen as a source of strength, shelter and protection. Calms fear and brings laughter. Guards the rebirth of the sun; protects against evil

Fidelity. Symbol for truth and the eternity of God (for what is true, is eternal).

The number “four” represents the world: practicality and stability.

Love. The center of development.

A wanderer on this earth. A messenger or guide on life’s journey. Was the first bird released from Noah’s ark. Ravens were thought to be the only birds to understand the augurs (interpretations of the Gods, signs, omens). The harbinger of change, hidden potential, and instinctiveness.

Healing energy; source of knowledge and inner wisdom. Active or dynamic aspect of the life of the unconscious psyche. Its ability to shed its skin makes the snake a symbol of invitation, transformation, self renewal. Usually snakes are seen in healing and fertility rites. A snake is often considered a hunter.

A number associated with perfection (omne trium perfectum). Often said that “the third time is a charm”.

The Three Sisters are three volcanic peaks of the Cascade Range in Oregon, USA. The Sisters were named Faith, Hope, and Charity by early settlers.