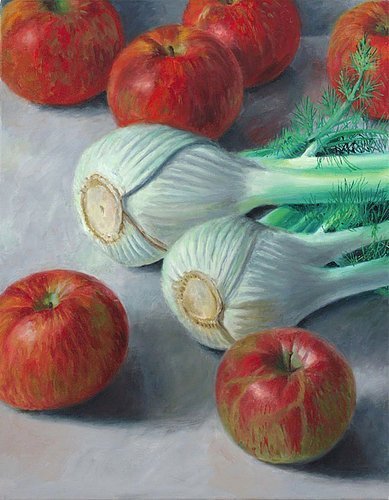 Our local farmer’s market inspires many of my food still lives. The mixed greens and reds of the apples caught my eye, and the fennel provided a contrast of texture and color.

Douglas Newton has been painting seriously for about thirty years and full time for fifteen. Before that, he had a career as an advertising art director. At first, he worked in a "suburban surrealism" mode, painting the American landscape, houses and gardens, mostly from his imagination. He has also drawn and painted extensively from the figure. At the same time, he began painting still lives, mostly food, toys and household objects. Gradually, the still life painting became his main interest. Newton works directly from nature, instead of using photography as a reference. The paintings are all oil on canvas, gallery wrapped on heavy stretchers. His main focus is capturing the effects of light on form, texture and color. He also tries to make the paint itself beautiful, and to feel, not like photo realism, but as rich, sensuous oil painting.