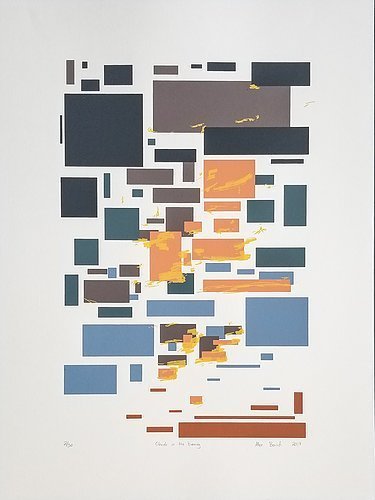 Clouds in the Evening

The Island of Hawaii has one of the most diverse collections of landscapes of any place on earth, from tropical rainforest to semi-arid desert and alpine snowcapped mountains. The Big Island, as it is called, makes up more than 60% of the landmass of the state while being home to only 15% of its population. While beautiful, the island can give the impression of being a wild, rugged, and sometimes a little run down kind of place. It has been inhabited for more a thousand years and was the seat of the Kingdom of Hawaii before being annexed to the United States in the 19th century.

My work is a series of abstract geometric prints that examine the diverse and beautiful landscapes of the island while trying to avoid being overly romantic about a location that is easy to romanticize. By abstracting the landscapes I am trying to remove the viewer from thinking only about the attractiveness of the landscape itself, and hope to open up the viewer to other interpretations of the landscape beyond its direct alluring quality.

"I graduated from Franklin Pierce in 2006, and spent a few years at a few uninspiring jobs. In of 2007 I decided that I needed a change, so I applied to a grad school that I had been thinking of since my last semester in college. I was rejected. I redid my portfolio and wrote a new essay and applied again, and was rejected again, this time by phone so that there would no mistake. So I took what little money I had saved and went to Africa, as one does.In Africa I took what felt like the first meaningful photos since I had been in school. I felt that I was in fact good at something. So in a moment of hubris I applied to an even better grad school. In a turn of events that surprises me to this day, I was accepted. The Pratt Institute of Art is the kind of school that I never imagined I would be allowed into as an undergrad, let alone as a graduate student. I still have days where I am not sure I deserved it, but they sent the papers and that was that. I loved Pratt. Those may be the best two years of my life. It was challenging and difficult and I really started to learn something about art. I am still proud of the work I did there, and part of me will always miss New York City.Now I live on the Island of Hawai'i. It's not where I ever expected to end up, but there are far worse places to be. I try to make art from time to time. I try not to give up, because that would be so easy."