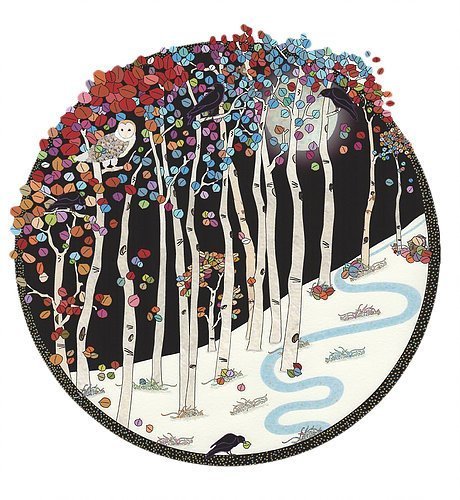 Bright Moon in the Aspen Grove

The Aspen tree grows in large clonal colonies derived from a single seedling. Symbolizes a determination to overcome fears and doubts. The tree is seen as a source of strength, shelter, and protection. Soothes unexplained worries and anxieties.

The Aspen bark contains chlorophyll so the tree can continue to grow in the winter months. The bark produces salicylic acid, a precursor to aspirin. Can be used as a tonic to treat weakness.

A wanderer on this earth. A messenger or guide on life’s journey. Was the first bird released from Noah’s ark. Ravens were thought to be the only birds to understand the augurs (interpretations of the Gods, signs, omens). The harbinger of change, hidden potential, and instinctiveness.

Mouse (under the leaves)

Attention to detail. Humble. Generous. Small and hard to find, just as humility is. Path finder.

Sources of life. Symbolizes fertility. Is an image of the never ending flow of time.