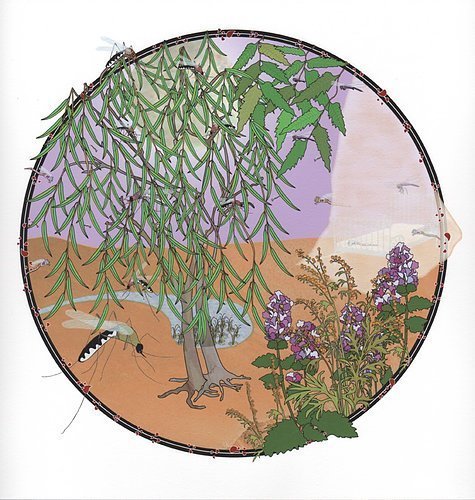 A blood disease caused by a parasite that is carried by female mosquitoes. It is life-threatening. Once bitten, the parasite invades the host liver and multiplies, infecting and destroying the red blood cells.

Malaria is transmitted by the female mosquito. The female takes the blood meal from a bite and uses the proteins of the blood to carry out egg production. During a bite, saliva from an infected mosquito carrying the malaria parasite is transmitted to the bitten person.

The eucalyptus tree grows to approximately 80 feet tall, needing full sunlight. It has blue green foliage. The tree has a sweet aroma which naturally repels mosquitoes.

Speed. Whirlwind of activity. Rebirth. Swiftness. Considered a messenger. The dragonfly is a predator

of mosquitoes at all stages of life. Dragonfly larvae feed on mosquito larvae, while adult dragonflies eat adult mosquitoes. They are guards in the battle against the spread of malaria.

A perennial plant, catnip oil is an effective mosquito repellent. It also repels other bugs and insects, but attracts butterflies. Attractive to most cats.

The most effective means of preventing mosquito bites while sleeping is a bed net. The typical mosquito bite occurs between 9p.m. and 5a.m. Each net lasts between 3-4 years. Insecticide-treated bed nets have been shown to reduce malaria deaths of children under the age of 5.

The tree is a fast growing evergreen tree that grows best in tropical regions. In India, the neem tree is known as the “village pharmacy”. Neem oil is a natural mosquito repellent. Sometimes the oil is used with kerosene lamps or citronella flares.

The female mosquito needs blood to carry out her egg production.

Sweet wormwood is a perennial plant with greenish silver foliage. It has a pungent odor that keeps mosquitoes at a distance. Crush leaves of the wormwood plant form a smudge that is an effective mosquito repellent.