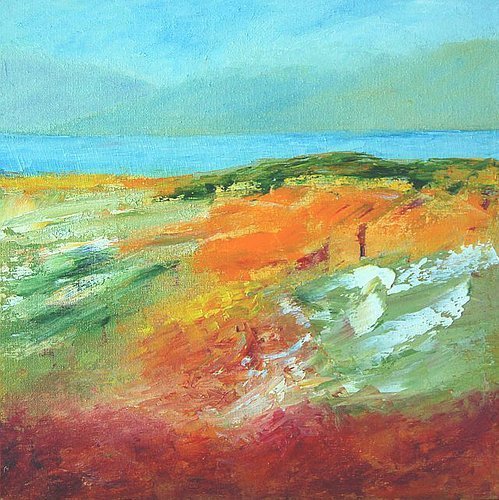 She is a creative painter, using subjective inspiration as merely a starting point for the painting to develop, and generally choosing to use pure, unmixed colour, letting it work its magic by sitting side by side with, or on top of, another colour. Abstract is her passion and is a strong influence in all the work she undertakes.

Lynda Cookson came from a family of artists and began her own career as an artist, formally, in 1994 whilst living in Cape Town, South Africa. In 2001 Lynda moved to Ireland and settled in Connemara, Co Galway. It took a couple of years before she felt she had begun to absorb and take on some of her new environment and in that time she began to experiment with oil paints. In December 2014 she and her husband moved from Ireland to Brittany in France where she continues to paint and teach in a stunning 17th Century farm house. (Check her blog for art class and workshop information) Her painting style developed from her fascination with texture, colour and movement and her paintings continue to express a strong sense of energy and vitality. She aims for a feeling of excitement and inner recognition from her viewers. Abstract and impressionism are her passion.